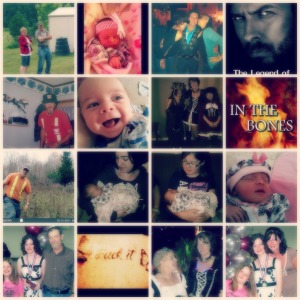 So, it’s that time of year again. What time? You know, when we all look back and say “What the hell happened?” This year started horribly for me personally. My father passed away on December 11, 2012, and I believed my world was crumbling in on me. A couple of weeks after the funeral, Kurt took off to British Columbia for eight months, and I had to prepare to move me and my girls out as well. I had to clear out our house, replace floors, HVAC systems, and clean, clean, clean, and then pack all our shit, move to an apartment (which the kids and I fondly refer to as the seventh circle of Hell), clean up the yard (you have no idea), list the house for sale—only to move back in and take the house off the market because Kurt came back home in August. Also, poison sumac. I don’t think I need to say more.

The good news is the stress and injuries caused by the house nightmare kept me busy and distracted as my heart grieved for my dad’s passing. The bad news is I had no time for much of anything else. I picked up my writing again in September, and things started to improve. I’ve written 3 novels this year, drafts only of course, and straightened the kinks out of a couple more I plan to publish in the near future.

I actually accomplished more in my writing than I ever have, and I think the shitty start is the reason. You see, soon after Dad was diagnosed, he became too weak to be on his own for long periods. I visited him almost daily, and after many conversations about life and what he’d do if he’d been given more of it, he inspired me to say “Fuck it” (and I committed to that ideology completely) and I stepped off the hamster wheel of querying and rejection. I published In the Bones and The Legend of Jackson Murphy myself, and I have a couple more novels lined up for this year (if I can get the damn things edited and ready to go, that is). They’ve done well locally, although I’m still figuring out how to operate the Amazon machine.

One of my novels, Lucky, was picked up by Crescent Moon Press, as well. I wrote it last year during NaNoWriMo, as most of you know, and my goal the time was to just have fun. I didn’t consider publishing it until I’d finished. Then, on a whim, I sent out one query, and they liked it. This book is the first in what I planned to be a series of novels featuring Greek gods and other paranormal characters (I have this one outline involving a demon, but we’ll see how that pans out).

And I recently joined an awesome, talented and hilarious bunch of authors, and I’m having a blast checking out their books.

So, all in all, 2013 has been the worst year of my life, but also one of the best. Bittersweet. It’s amazing, though, what you can accomplish when you toss away your expectations and just do what your gut says you should. Mine said to go for it. And I did.

I think Dad would approve.

6 thoughts on “2013: On Writing, Life, Word Counts, and That Rat-Bastard Called Time”

horror with no limits