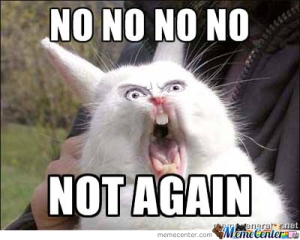 Don’t run away. I’m not going to try to convert any haters to the wondrous/ridiculous process that is National Novel Writing Month. For those of you living under rocks, NaNoWriMo (I really hate typing that) occurs every November. Participants have from November 1 through November 30 to write 50,000 words in a single novel. (No, you can’t add up words from multiple projects, because that’s not how it’s done.)

Why would anyone do that to themselves? It’s certainly not to complete a novel, because novels are generally longer than 50K words, and if you’re writing that quickly, it’s going to be at least a partial pile of shit when you’re done.

Actually, it’s not so bad. You only need to write about 1,666 words each day to bring you to your goal. That’s less than a chapter for some of us. However, the hoopla surrounding NaNoWriMo, and the way it focuses on quantity instead of quality, and possibly because anyone can do it (writer or not), has caused quite a divide between NaNoWrimo Haters and Players. I say, why can’t we all just get along?

Because we’re human. So let’s find some middle ground, shall we?

To all the NaNoWriMo Haters out there (and while I participate, I also hate from time to time), relax. Stop judging. You don’t have to participate, and if you take off the cranky pants or shut your hating mouth for a bit, no one’s going to make you participate. The people participating have a bazillion different reasons to do this insanity, and some of them are actually good. Not every NaNoWriMo player is doing it for the glory. (And if you think there’s glory, think again.) Some of us need a way to get our ass in a chair and establish a routine. NaNoWriMo works well for us. Others just want to have a little fun. Stop raining on our parades. Mind your business and worry about your own writing.

To all the NaNoWriMo Players out there, shut up about it. No one cares about your daily progress. If you want to share, NaNoWriMo has a site where you can do that. Everyone over there is just dying to hear how you’re doing so vomit your self-indulgent shit there and leave the rest of the Internet alone. Sure, you can share on social media, but just once a week at the most. Please. Otherwise, you asked for all the hate coming your way.

For the fence-sitters, let’s take a look at the good, the bad, and the ugly parts of NaNoWriMo and maybe you’ll pick a side.

It gets you writing. We love writing.

It also helps you make some new writing friends. Okay, for me, that’s not a deal maker. I don’t need new friends (though I love each and every new weirdo I find), but writing is a lonely endeavor and sometimes a bit of encouragement is all it takes to get someone up and going. NaNoWriMo has thousands of participants and these folks have a shit ton of support forums for those of you needing a couple of cheerleaders to keep you typing.

NaNoWriMo can be a good confidence booster too, because it gives you permission to write utter crap, which is what the first draft is all about. I really like when I tell my inner editor to go suck it. She’s a bitch.

However, if you don’t make the word count goal, it feels pretty awful. Yes, we’ve arrived at the bad part. You’re not a failure, but even if you manage to write 49,900 words, you feel like shit because you don’t get that stupid banner at the end. If you can handle failure, then this isn’t such a bad thing. If you can’t, well, I’ll just leave that with you.

And NaNoWriMo only lasts 30 days and for some of you, that’s the only time you write all year. You’ll never get “good” at something if you only do it occasionally. I’m not saying the yearly writers should quit. I’m saying don’t let NaNoWriMo be the only time you do it. Keep going. Otherwise, the haters are kind of right about you.

You don’t actually get a prize either. Just bragging rights. I know it says you “win” but there’s no trophy or cash payout. Just the satisfaction of being part of that small percentage of folks that actually make it to 50,000 words. It’s kind of anticlimactic, to be honest.

But I think the worst part of NaNoWriMo is that some of you don’t realize that you’re not done after November 30. That baby you hammered out is rough. Hell, it’s probably not even a full novel, because 50,000 words is not the standard length of a novel. I won’t get into the particulars of that right now. Let’s say it is a novel. As of November 30, what you’ve written is gross. It’s disgusting. It’s not fit for reading. DO NOT PUBLISH. DO NOT QUERY.

But people will query. People will publish. This is where I get the haters and their judgment. If you’re publishing a NaNoWriMo project immediately, I hate you too. Get some self-control, people. Edit that messed up piece of shit.

This reminds me of something else I hate about NaNoWriMo: It makes writing feel like work.

Oh yes, it should be work, but I live in a magical land where I like to enjoy writing when I’m doing it. Writing with a metaphorical axe hanging over my head is not fun at all. By the end of November, I loathe the sight of my laptop. I have to force myself to open the file and keep going. I’m sure I’m not alone in that feeling.

However, it’s a good wakeup call. We need to view our writing as work, because it’s hard to take it seriously otherwise. If you’re writing with the goal of publishing and selling your work to others, it’s important you handle the process professionally. So, yay NaNoWriMo for sucking all the joy out of it!

Despite all those things I hate about NaNoWriMo, I still get excited about participating. I never said anything about me made sense. So, here are a few quick tips to “winning” NaNoWriMo without getting killed by haters:

Shut up. The first rule of NaNoWriMo is to avoid talking about it EVERYDAMNPLACEYOUGO.

No one cares. Accept this and you’ll be glad you did. No one cares what you’re doing or why. They only care that you take the trash out and remember to feed your children. Writing a novel? So is every other weirdo on the planet.

Outline it. When you outline, you can just write when November 1st arrives. Or don’t outline. I don’t care how you do this, to be honest.

Netflix is the Devil’s instrument and IT WILL CRUSH YOU. Okay, so maybe it’ll just make it hard to meet your word count goals. Still, pretty suckish.

Wear a rubber band on your wrist or wherever else you feel pain intensely. If you’re tempted to tweet or whatever about your progress, or to turn on Netflix, snap that band. Put some spikes in it for extra effectiveness.

What you write will suck. NaNoWriMo projects are like rough drafts of rough drafts. Don’t be disheartened when you read it or a friend reads it and your brain flees out the back of your head to escape the awfulness.

NaNoWriMo only focuses on one element of the writing process: word count. It’s about quantity, not quality. But editing is your friend. It’s going to be okay. Quality will come after November 30.

Accept that people will judge you. Face it, a lot of “serious” authors hate NaNoWriMo, and for good reason. I mean, many of the participants are first time writers. Some only write during NaNoWriMo. Serious writers write every day. Every week. Every month. Etcetera. This is the spiel you’ll hear. Get used to it.

And keep in mind:

The success rate is only around 20%. That means most participants don’t make the goal of 50,000 words in a month. Just tossing that out there.

Finally, have fun. It’s just a thing on the Internet that we do because, why not? Enjoy it and stop taking yourself so seriously.

And one more thing:

Sex, Transvestites, Angels, and Assholes, the sequel to Sex, Peanuts, Fangs, and Fur, is almost ready. I’m hoping for a Halloween publication. Excited!! Cover reveal in the next few days.

Okay, that is all.

8 thoughts on “Surviving NaNoWriMo: A Guide for Haters and Players”